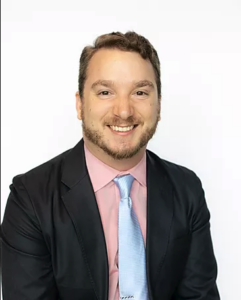 Rabbi Benjamin Altshuler is honored to serve as the faith leader for Mt. Sinai Congregation and the local Jewish communities in Northern Central Wisconsin. His goals are to cultivate thriving Judaism through personal relationships and creative expression resulting in meaningful observance and intentional community.

Although new to the Wausau area, Benjamin is a product of the Midwest and many vibrant Jewish communities. He received rabbinic ordination from the Reform Jewish Seminary, Hebrew Union College – Jewish Institute of Religion in Cincinnati, OH in 2020. There, he also earned his MAHL degree and received the Israel Bettan Memorial Prize for creative and imaginative pulpit presentation. Rabbi Altshuler has served several communities including synagogues in Bluefield, WV, Muncie, IN, and Cincinnati, OH. He also worked as a chaplain during his clinical pastoral education at UC West Chester Hospital.

Benjamin is an alumnus of Carleton College in Northfield, MN, where he graduated magna cum laude with a degree in Cognitive Science. Prior to matriculating at HUC, Benj was a corps member of Avodah in Chicago; he worked for Friedman Place, a supportive living facility for blind and visually impaired adults. This connection with Avodah continues as an alumni educator and recruiter.
Rabbi Altshuler originally hails from the suburbs of Chicago. He spent summers at Olin-Sang-Ruby Union Institute, a Jewish camp in Oconomowoc, WI. Camp is where Benjamin’s Jewish journey developed and gained momentum. He is proud to now serve at OSRUI as a member of the faculty.

Rabbi Benjamin Altshuler is eager to engage with the Mt. Sinai community and explore Jewish identity, prayer, and learning. He would love to connect to discover what drives you, how social justice informs your Judaism, your favorite books, or a cherished family recipe.

Rabbi Dan Danson was the spiritual leader of Mt Sinai from 1988-2017.  He led weekly and holiday worship services, and provided pastoral services and education to Temple members.  He was the glue that held our geographically far-flung Jewish Community together.  Rabbi Dan was often the public representative of our Jewish community to friends and neighbors throughout north central Wisconsin. Usually, it was Rabbi Dan who was interviewed for radio, television, and newspapers concerning local, national, and international news about Judaism and Israel.
He was an active member of local clergy and community organizations that worked to improve the lives of our citizens. His activities in the local community included serving on the Board of the Volunteer Center of Marathon County, the Wausau In-House Network,  chairperson of the NAOMI Clergy Caucus, and the Institutional Review Board of Aspirus and Marshfield Clinic.
Rabbi Dan is an active member of the Central Conference of American Rabbis (CCAR) and the Midwest Association of Reform Rabbis (MWARR), and  has served on the Board of the CCAR and as Chair of its Small Cities Committee, and as President of the MWARR.  In the summer, he was a faculty member at the Union for Reform Judaism’s Olin Sang Ruby camp in Oconomowoc, Wisconsin.

He and his wife now live in New York state.